Advice on the Practice of Yoga


One of the ways to come to understand how to stay in the Asana (yoga pose), with the Kumbhaka (holding the breath as part of Pranayama — the breathing exercises), in meditation, or with any difficult situation we are in in life is to imagine staying there forever. Just like when you are waiting there on the platform for a subway, if someone comes and tells you that the subway will come in half-an-hour, then you can sit down, relax and be calm.

Most of our actions in life should be like that. Any feeling of expectation automatically makes the mind restless. But, if you feel like you are going to be there forever, you relax.

Like when someone is about to be judged: to be killed or not killed. Before judgment is handed down, the person is really nervous while he waits. Judgement comes: “You are the one.” After that, he says to himself: “Okay, that’s it,” and he can accept his fate. He has to find a way to cope with it automatically. If you know what is actually going to happen, you can even face death easily. If you know 100% that you are going to die, no fear. When you are expecting, wondering what may happen, that’s the pain.

It’s like this with disease, too. “When am I going to be fully healed?” You get restless — the mind sometimes is restless. But if you know from the doctor that you are going to be healthy again in one year, you relax and feel comfortable. You know the result, so you don’t keep guessing as to what it might be. There are many examples of similar situations in life. Like when you are thirsty or hungry, imagine there will be no more food for a week. Then you assume another attitude. “I have to save here as much as I can.” But if you have that constantly expecting mindset, i.e.: you don’t know if it’s going to be now or later, the mind is always restless.

Stop looking for the finish line

With yoga poses, the process is the same. You become the pose at that moment when you are holding it. Don’t worry about when it is going to finish. The teacher will tell you when to break the pose, so don’t worry. Try to relax and imagine that you are going to stay there forever. And then, automatically, your mind will try to find the most comfortable way to cope with the situation.

This is something that comes naturally to you when you know a few things like about having no expectations. By your own experience, it comes from inside you. When your mind becomes fit for knowledge, all these ideas start coming into your mind. Maybe someone else has it, too — it doesn’t really belong to any of us. This is like inner intuition coupled with some intelligence and discrimination.

Another example, if you are doing some sort of spiritual practice on your own, meditation or the breathing exercises, if you have the time and you are not doing anything else in your life, just let it go and stay as long as you can. By inner intuition, you stay, stay, stay. By inner intuition, a voice comes and you make decisions. Of course, if you have to work, do this, do that, go here, go there, then you have to set an alarm to know when to break. Poses also, as long as you feel comfortable, you stay there, except for inverted poses. Inverted poses, you have to strengthen the blood vessels in the brain first. Then gradually when you get stronger, stay a little longer. For most of the poses, stay as long as you like. The breathing also has to be increased gradually. But, you reach a point when you can stay as long as you like, as long as you feel comfortable.

Screaming against the wall

There was a student at the yoga center a while ago who stayed in headstand against the wall until she started screaming. I think she was the best of all the students because she would die there, but she would never go down / break the pose, unless I would say to. That is reverence, obedience and respect for the teacher. This is maybe the only student who is fit for Self-realization, rather than the others who are so busy with their own thing: putting legs behind the head, all of these things that there’s no value to. Even the person who breaks their neck and dies, he or she has good credit next time because he or she died for a good cause. Deep inside, your consciousness — the higher Self, is so happy. “I almost broke my neck, but I followed the instructions.” That brings inner happiness.

That’s what happens when you realize things different. Let’s say I realize some knowledge, so I have this I know. You have this formula that fits to everything. Let’s say I have to describe a AA battery. I know it — I have it in my hand. I don’t have to make preparations. As soon as I start to speak, I simply describe what I know. Now people who didn’t realize this, they have to memorize things and rely on memory. When something is natural and truly a part of you, it looks like you have it in your hand. You can then describe it in many ways. You can go around, describe the yoga pose. That’s the difference from when you rely on memory. Due to this, I don’t prepare for teaching. I have a little formula there. No preparations, I just keep talking, keep letting whatever is coming out come without concern or fear. If I make a mistake, I just go with the mistakes, too. They are usually coming naturally, as well.

I know of one person who was with us in the former location on 23rd Street and 3rd Avenue. She came to give a speech and was trying to memorize it before it was her turn to speak. I saw how nervous she was. She looked at me and said something about how relaxed I was. I told her: “I don’t know what I am going to say.” Whatever comes at the time, I will just surrender and allow it to move through me without being attached in any way to the results.

This waiting forever attitude is a combination of surrender and offering up the fruit of all action. If we are action-less, we are like a witness, too. Also, we know a few things about how the mind works. In the feeling of expectation, the mind becomes restless. Of course, if you are doing yoga in order to get healthy or to help someone, of course it’s toward Divine things. You are not expecting anything; then it’s part of surrender.

Surrender to the Divine

Whatever we do in order to participate in helping people is already part of the surrender to G-d. Even if you want to become let’s say a celebrity, not because you want fame, but because that’s going to be a way to reach thousands of people, that’s also surrender. In some cases, you have to wear a three-piece suit, dress properly because that’s the way you go through another type of situation in order to help people. So if you want to be an anchor on TV, you have to dress properly and be comfortable in that sort of situation. As long as it is done in order to help humanity, it’s surrender to G-d.

Immerse yourself in a dynamic practice that is firmly rooted in traditional yoga. Learn more of Sri Dharma Mittra 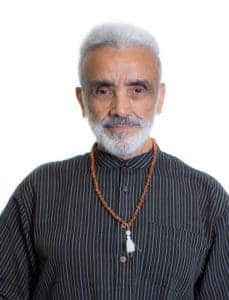 Sri Dharma Mittra is a globally renowned yoga teacher who first encountered yoga as a teenager. He then met his guru in 1964 and embarked on intensive and profound training. Sri Dharma Mittra founded one of the early independent schools of yoga in New York City in 1975 and has taught many thousands of students around the world since then. Today, he continues to disseminate the complete traditional science of yoga through daily classes, international workshops, and his Life of a Yogi teacher trainings at the Dharma Yoga New York Center.

A Life of Meaning

The Healing Magic of Yoga and Nia

Taking Time to Pause, Relax and Refill Your Well

How to Clean Your Yoga Mat

The Whys and Hows of Quality Sleep

The Role of Discipline in Happiness (and Yoga!)

What Headaches Can Do to Your Productivity

Healing Mantras for Anxiety and Depression