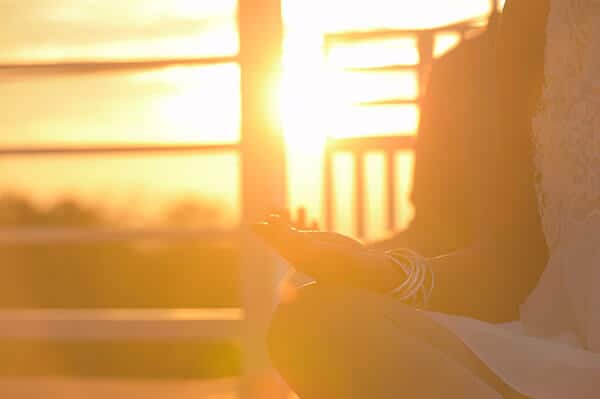 While taking a three-week course in the mountains of Boone, I spent the first week battling doubt in my abilities. The second week brought many other hurdles. My mind was willing, but could my 50-something-year-old body handle the course?

The classes each week followed a similar pattern. We had early morning yoga, the full sequence (40+ poses) followed by breathing exercises and meditation. Then, we would walk to the dining hall for breakfast and seva. After, we would go back to the classroom for more yoga poses and strength training until lunch. Following lunch, we would do seva before walking to the classroom building.

The afternoon consisted of lessons on anatomy, physiology, and the endocrine system, more yoga poses, and meditation before dinner. After dinner, we did seva then walked back to Veda II (the classroom building) for satsang. The day ended with yoga theory, and study sessions/homework before hopefully falling asleep before midnight.

That’s a demanding schedule for someone like me. Before my car accident, I was training to run a marathon. I was a little more used to a physically disciplined life then, but that was two years ago. By week two, I wasn’t just tired; I was exhausted.

Not only was the course challenging, but Boone in October brought constant weather changes. There would be eighty-degree days followed by twenty-degree days. The retreat center experienced flooding and sunshine, gale-force winds and gentle breezes, beautiful fall foliage and snow. Part of the physical challenge of the course became figuring out what to wear each day: flip flops or winter boots, t-shirts or thick fuzzy sweaters.

However drastic the change in weather might be, the retreat center maintained its awe-inspiring beauty. After the flooding, a double rainbow painted the sky. A bright full moon warmed the frigid night. There was beauty everywhere I looked. It seemed the weather was in celebration of our course.

A week of celebrations

The weather wasn’t the only thing celebrating. We also celebrated Diwali, the Festival of Lights. Our class dressed for the occasion and held a celebration after dinner. I was unprepared for the Diwali celebration – I didn’t pack a dress. Sensing my feeling of inadequacy, my class buddy, Sunita, invited me to her room, reached in her suitcase and generously gave me a beautiful dress to wear. Her generosity humbled me.

The celebrations continued with two birthdays. Celebrating our Yogi Master’s birthday, we danced, sang and ate cake. For Halloween, we celebrated yet another birthday. We laughed and danced with Jennifer (one of our yoga instructors) and even pranked her by dressing up our anatomy class skeleton with some of her clothes and placing the skeleton on her yoga mat. The nights ended with singing around a campfire eating candy from our Sanskrit teacher.

We worked hard each day, but we also celebrated with great joy.

A varied team of instructors

We had seven instructors who taught us every aspect of yoga. Andrew, a Sanskrit scholar, demonstrated how to pronounce Sanskrit words correctly. Medha, an expert on Ayurveda, lectured on the importance of diet. Bharti, a medical doctor, guided us through anatomy, physiology, and the endocrine system. Neha, Jennifer, and Neelam taught the morning yoga classes and were always on hand to help. There was so much to the course that I hadn’t anticipated. I knew there would be a Yogi Master, but to have six additional instructors guiding us was fantastic. It increased the intensity of the course because it heightened our growth potential.

The course was so much more than learning yoga poses. We were learning to be healthier, happier people from the inside out. 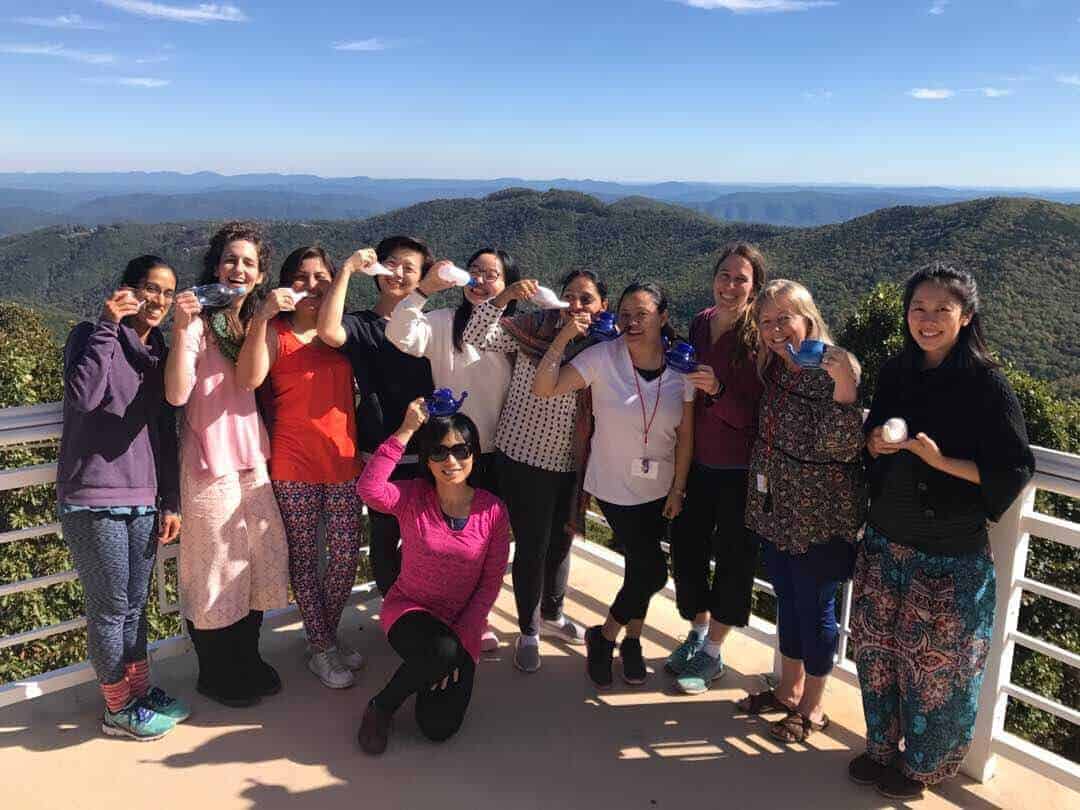 During week two, we literally moved our insides…out. One day we learned how to use the infamous Neti pot. Our entire class, together, cleaned out our sinuses using salt water while hanging our heads over the railing of the dining hall veranda. The saline cleared away the gunk and carried it down the hill to mix with the fallen leaves. On the terrace once more, we learned the practice of Sutra Neti, or nasal flossing, which I was not a big fan of; I’ll leave it at that.

Another class exercise was Shankhaprakshalana: a salt water colon cleanse. This time IN the dining hall, our entire class drank salt water, performed eight yoga poses, and ran to the nearby bathroom as the concoction began to work. Then we would grab another cup of the colon cleansing elixir, return to our yoga mats and continue the poses until it was time for another mad dash for the toilets. In a way, it was a lot like the prep for the colonoscopy I had last year except for the classmates and the yoga. I have to add that it didn’t taste as awful as the colonoscopy prep. The Neti pot experience may have brought our class closer, but the Shankhaprakshalana took our bonding to a whole new level.

At first, I thought: I will never do this again, but the cleanse left me feeling lighter. I made a mental note to repeat the practice every six months. We were getting rid of trapped physical and emotional waste. Who needs to hold on to all that garbage anyway?

Two weeks of focusing on yoga created a visible change in me. My clothes hung more loosely, and I was breathing more freely (and not just because of the Neti pot).

There was a bag of emergency cookies in my room – Pepperidge Farm Milano. I unpacked the cookies the first day and carefully placed them on the desk. I used to eat 4 or 5 every night. Maybe it was because I thought it gave me control over my day, or possibly just because? After the first week, I found that number being knocked down to one and not every night. Just one cookie every now and then. The entire yoga process was creating a calmer Laurie, a happier me that didn’t really need a cookie before bed.

Looseness in the body

Falling asleep at night was no problem at all. In the past, I would have to take Motrin PM to fall asleep, but with the disciplined work came a tired body and a clear mind that had no problem sleeping. Waking up at 5 am became easier and easier. When the weather was good, I loved walking to class alone but for the stars brilliant against the dark sky.

With all of the mountain walks combined with endless hours of yoga, I was amazed that I had no soreness. My neck and back are often sore from the car accident I had two years ago. While I was taking the yoga course, I had no stiffness or soreness.

The Yogi Master certainly knew what he was doing. All those poses we were holding were not only strengthening but also detoxing our bodies and emotions. There were times during class when I would notice tears streaming down my face. I wasn’t sad or hurt, yet the tears came, freeing me from trapped emotions. I wasn’t the only person experiencing tears in class. We became experts at knowing where the tissue box was and gently passing it to the person in need. That wasn’t the only release. There were times when bursts of laughter would erupt from the room.

During the second week, I began to concentrate on my body’s alignment, and not just during the hours of yoga sessions. While walking, I was more aware of my posture. Did I suck in my stomach? Were my shoulders pulled down and away from my ears? While I sat, was my spine straight?
The stronger my body became, the more I cared about my body alignment, and the less I cared about my flexibility.

My mind and body became stronger, allowing my spirit to take center stage. The total immersion into yoga allowed a safe place for me to grow.

During the second week, our minds were challenged to memorize the sequence of poses, Sanskrit terms, ancient yoga knowledge, anatomy, physiology, and the endocrine system. Our bodies worked to perform the correct alignment for the poses while learning counter poses. Our bodies also had to build up from the cleanses while maintaining a tight daily schedule. Eventually, our spirits were challenged as locked-in emotions were set free allowing for growth.

My fear of not being able to complete the course physically was unfounded. The second week taught me that when led in the right direction, my body can keep up just fine. It even had energy left over to celebrate happy events. I began to feel thinner, stronger, and more comfortable in my skin. I felt my spirit grow as week two ended and week three started.

Two weeks down and one to go. Easy, right? Not really. The class as a whole was stronger and happier, but that didn’t make week three easier. No, it wasn’t easy at all. While the hours spent in class had become more routine, and the poses an enjoyable challenge, week three brought with it challenges that made me question if my spirit was going to be strong enough to help me pass the course.