The First Steps: Drawn Through Life by Nature’s Inspiration

For as long as I can recall, the presence of nature has been fascinating. I grew up in a rural coastal setting. There, the natural world, a raw and constant companion, filled my senses and informed early developmental memories. Nature continues to organize my experience.

Nature’s inspiration in my formative years

For several generations, my migrant ancestors learned to adapt and live in the rugged, coastal setting of what is now known as eastern Canada. As a young child, a favorite memory of mine is feeling comforted during forceful and imposing Atlantic storms. The wind and rain gather majestic power, moving across to open ocean. The rain would pelt dense layers as the strong wind rattled the bones of our small house. At times, it also felt as though the island beneath us, the rock foundation, was also shaken by the storm waves. Curled up indoors, dry and dark, I clung to safety and warmth beneath a set of heavy and tattered blankets. It was one of my most familiar feelings as a child, becoming something of a marker in the catalog of experiences.

When and where needed, my isolation healed when I considered the natural world around as a living, material context. Whether violent or gentle, I could manage to be held and safe.

Later, though still at a young age, I relocated to a big modern city where my senses adapted to processed rock of concrete, the screeching noise and diesel fumes of subway trains, and the must-have vigorous scent of dark coffee beans that stood out among all others in the grocery store. As an older adult, who can still access coffee outside of the city, my preferred choice is to live in a rural setting. The expanse of nature links me to simpler times and easeful space. I can also find and like to drink tea to perk up or slow down.

The wisdom of nature

My graduate background in the study of religion and culture, in the early 1990s, attracted and rooted my heart to the cross-cultural wisdom traditions that privilege the way of nature in teaching about and cultivating harmony. Things rise and fall but all is contained within the ocean of nature. A certain steadiness of mind and disposition of trust emerges and may be cultivated in these traditions.

As a young adult, while raising two children of my own, I was fortunate to have access to the forests of New England. My kids and I would frequent the hiking trails for a quick reset of our senses and fresh air. Repeatedly, my kids would initially be resistant to the idea of going to the forest. But always, without fail, once we were there in the environment, they fell in love with the experience of being in the woods. They would gather sticks, splash in puddles, and their movement would open up; they adapted to the environment by climbing, bouncing, and also coming to stillness to better listen to the world around and within them.

As a wellness instructor, I specialized in developing curriculum and guiding others in a conscious experience of nature through hiking and deep relaxation. For nearly two decades, I presented retreats mostly on the eastern North American coast and completed trips to the west and overseas in Europe.

Being involved with mindfulness-based outdoor retreats has allowed me to see how people respond when they get into the forest and walk together. I sense that human beings need their environment. The ecosystem of trees, lakes, and animals resonates with the wisdom of adapting. An ancient forest probably contains a level of intelligence that can be inspiring if one has the patience for or could be guided toward sensing its input. I realized early on that an indoor yoga studio is no match for the attentional curiosities of a wild forest, sky above and earth below.

When I started out leading retreats, teaching for me was utterly about what I could generate and do, as an authority; I was the host and had to perform as an expert. Eventually, I realized that nature, as well as the collective wisdom of the group, were also guiding a process.

My skill set developed over time around the principle that less is more. If I can manage to get out of the way, rather than imposing myself as an authority, then the deep support and presence of nature has a better chance of being perceived as input for the chronic human mind.

I know refer to the essential process of the retreat experience as “the first steps.” Guests are enrolled for an outdoor mindfulness experience which, for the group in general, is basically a transition from the modern industrial pace of an urban setting toward an immersion in nature. The change entails exposing their sense of self to an environment that is at once instinctively familiar, life-giving, and yet made strange by their chronic lifestyle.

The first steps provide the rare kerplunk that drops the uptight participant into their roots, revealing a deeper foundation from which to feel the nourishment of being supported and held. The transition is from being busy and having chronic sympathetic tone, stressed by habits of modern culture, towards what is older, somehow slower, necessary parasympathetic wisdom.

The first steps involve surrendering the identity of busy. Learning how to slow down, catch up with the breath, and allow the senses to receive the colors, fragrances, and textures of the wild landscape. The birds’ chirp, wind moves through pine needles, branches creak, and water gurgles; the revelation is that all are subject to gravity, an engine, and power that supports the flow of things situated in creation. Awe, Ooh, and Hmm becomes AUM, the sound of the universe reveals itself in the body and mind of the participant observer.

The first steps ultimately require knowing that one needs to be in the forest, to witness and reconnect with a more in-depth ecological system; breathing fresh air leads to seeing the leaves on a tree within the forest, leads to laughter and giggles in the company of others who are also returning to movement and somatic intelligence.
The first step means accepting the invitation of the environment. For thousands if not millions of years, all beings have existed and persisted, calling from the bewildering mix of elements in nature to invite realization of the sweet, harsh reward of aliveness.

I have been privileged to work with curriculum development in this program, probably hosting 2,000 participants. I learned a lot over time, mostly from others and second to none is the lesson that ‘less is more’; I didn’t have much to do after all. Instead, learn to get out of the way, allowing people to take those first steps from tension towards slowing down.
I feel my work as a wellness educator has helped me to prepare skills for the clinical setting. My feeling is that the future of psychology will be leaning towards the physically active as a more holistic approach, wherein mind and body are not separate but interdependent. I aspire to introduce patients to a sense of safety and finding their way back to natural rhythms, toward their breath, somatic intelligence, and inherent motivations as they reflect on their context.

As a psychologist in training, I see myself appreciating the primal aspects of individuals and their motivations for safety and connection and community. I like to imagine that I’ll be able to keep an awareness of nature, via ancestors and somatic privilege, as a way of feeling rooted and connected and supported. 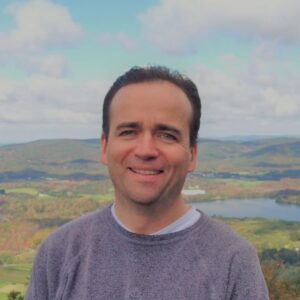 Randal Williams
Randal Williams, M.A., M.Sc., is a mindfulness-based, client-centered educator and doctoral candidate in clinical psychology, strongly focused on integrative care and the role of compassion in healthy development and aging. He has taught for 25 years at leading holistic retreat centers,  emphasizing heart-centered inspiration and appreciation for accessibility and diversity.