You Matter to the Universe

Of all our relationships, one stands apart in its ability to inspire and mystify—our relationship to the universe—but most of the time we remain as unaware of the star-speckled space enveloping us as the wallpaper in our living room.

The universe is the pillar that sustains everything in existence, including all our relationships, but despite the pivotal role it plays, we hardly notice it at all. We identify passionately with our private property, neighborhood, country, or even the whole planet, but tend to remain oblivious to the boundless depth of starry space that stretches out endlessly in all directions around us.

But if you stood under the vaulted heavens on a crisp summer night, gazed up, and became aware of the shimmering planets, stars, and galaxies that pixilate the vastness of space, what would you experience? Would you feel like a detached, insignificant spectator standing on a lonesome planet observing a meaningless mass of twirling matter from the fringes? Or would you feel a deep, personal, and heartfelt connection with those sparkling lights?

How do you really feel about the universe? Do you feel at “home” in it, or are you just a “homeless drifter” passing through? And if you imagined the universe as a giant being staring back at you as you gazed out at it, how do you imagine this being might feel about you? Does the universe relate to you with a sense of wonder, mystery, and awe, or as a meaningless mite on a planetary mote swirling in a galactic cauldron lost in immeasurable time?

The universe is your true family

As a rule, many of our deepest personal issues derive from our own early home environments. If we felt safe in our homes and were closely bonded to our kin, we are more likely to fully express ourselves in healthy ways as adults. But if our home life was fraught with fear, apathy, or uncertainty, we are more likely to shut down and close off in our dealings with the world later on. This rule also applies to the way we relate to the universe, our greater home, but on a larger scale.

The entire spiritual enterprise is founded on the notion that you matter to the universe more than you can ever imagine. In the broadest sense the universe is your mother, the stars are your ancestors, and space is your home, literally! The universe is your primordial family. Against the wildest odds, you won the cosmic lottery by being born a human being—a prize of inestimable value that is precious beyond all conceivable measure—and for this reason, the universe cherishes you as dearly as the most nurturing parent adores their child. This family loves you; this “home” welcomes you.

When we develop a loving, trusting relationship with Father Sky and Mother Earth, we awaken a universal love in our hearts that spans the breadth of the cosmos. We can then plug the network of all our human relations—even those that are flawed—right into that source and let them bask in the healing energy. In the process of developing a loving relationship with the universe, we inadvertently heal many of our own childhood traumas.

Through you, the universe evolves

Our insatiable urge to learn more about matter, life, and human nature represents the universe’s desire to know itself. Through our hands and eyes, the universe finally developed the ability to hold up a mirror and see its many faces. When an astronomer points a telescope at the starry canvas of space, the universe is admiring itself; when a biologist stumbles on a new species, the universe discovers another part of its body; when a philosopher elucidates the human condition, the universe becomes more knowledgeable about itself; and whenever a spiritual practitioner becomes enlightened, the universe realizes its own primordial nature.

Through us the universe has grown arms and legs and has become self-aware. Through us evolution has become self-directed. The rest of the animal kingdom is propelled into the future by the blind momentum of its evolutionary past, but we are not pushed forward from behind. We can conceive realities that do not yet exist and steer our own futures toward them—we control our destiny.

There is pain and pleasure in awakening

In pursuing our human destiny we offer the universe meaning, and through our fulfillment, we bring it happiness. But the universe also wallows in our sorrows. While striving to actualize a purposeful life, we stumble and fall repeatedly. We collect physical bruises and emotional scars that bleed and ache, sometimes for an entire lifetime.

In the midst of that pain, it is not unusual to forget who we truly are and feel stuck out in the middle of nowhere, without a clear sense of direction, overwhelmed by the hugeness of the cosmos and the seemingly insignificant space that we occupy in it.

Of all the species inhabiting the planet, only one can claim existential anguish as one of its defining characteristics: human beings. Elephants don’t suffer sleepless nights contemplating their purpose in life. Birds don’t need to read self-help books to discover their rightful place in the natural order. Crocodiles don’t require years of therapy to heal their broken hopes and dreams.

At its low point, the human condition becomes like a Greek tragedy in which the protagonist is blessed with a gift that is also a curse. That gift is our higher consciousness and the promise of the meaningful, fulfilling life that it can bring. But when we lack a sense of destiny or the energy to pursue it, then life becomes an unending nightmare from which we can’t wake up. That is the curse of being born human.

Despite the high hopes we place on finding happiness at some point in our future, the sad truth is that many of us leave this Earth still waiting to find it. But having a spiritual practice can help you avert that dismal fate. Your life can become a joyful, meaningful journey.

This article was adapted from The Master Key: Qigong Secrets for Vitality, Love, and Wisdom, by Robert Peng. 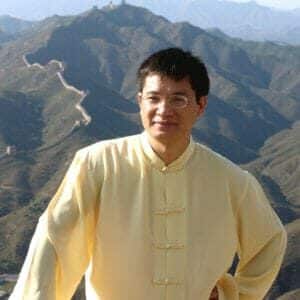 Robert Peng
Robert Peng is a Qigong master who, as a boy in China, secretly apprenticed under the legendary Buddhist monk Xiao Yao. Yao trained him in the martial and healing arts — a training which included 100 days of meditation and fasting in a dark, underground chamber deep in the mountains of the Chinese countryside. Later, Robert discovered that he had developed spiritual powers — including the ability to transmit powerful energy from his hands. He now offers a distillation of his training in the form of Qigong Empowerments, with the intention of enhancing the well-being and quality of life of his students.

Saucha: The First Niyama of Yoga