Neither Disturb Nor Get Disturbed

A yogi is very aware of what he thinks, speaks, and acts,  so that any of these don’t cause disturbance in  others’ minds. He looks at his intentions before he speaks or acts. If the intention is to hurt someone or put someone down, he doesn’t speak or act. If the intention is good, and if he must speak or act that may disturb others, he thinks of a skillful way to say what needs to be said, and do what needs to be done.

A yogi also doesn’t get disturbed by what others say, do, or think. He is fully aware that people will say or do things that he may not like or agree with. He is awake in the acceptance of this truth that this will happen again and again. So when it happens, he doesn’t get disturbed.

A yogi is aware that what he thinks affects others, and others’ thoughts affect him. So he is very mindful of what he thinks, and doesn’t get affected by unnecessary thoughts that may be just passing through his mind, but may not be his own thoughts.

So, by not disturbing others, and by not getting disturbed by others, he remains peaceful within himself.

You can also live like a yogi. It is just a matter of continuous practice.

One who never disturbs anyone and one one who never gets disturbed by anyone,
and one who is free from mundane excitement,
anger, fear, and anxiety
is very dear to Me.
Bhagvad Geeta 12-15

Just by living this wisdom of not disturbing and not getting disturbed, the other qualities mentioned in the above shloka will automatically dawn in you.

May you be blessed to live like a yogi, if yoga is your path! 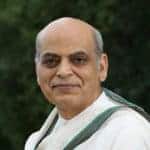 Krishan Verma
Krishan Verma has been teaching for more than 30 years and developed the Sri Sri Yoga program in 2000. Through his mastery of yoga, Krishan has trained more than 2,000 yoga teachers in over twenty countries across Europe, Africa, Asia, and North and South America. For his ceaseless effort toward spreading the light of yoga in the world, global spiritual leader Sri Sri Ravi Shankar conferred on him the title of “Yogacharya.”