The True Purpose of Peace

Long ago, a man experienced a series of startling revelations. Soon after, he founded a new religious movement. As is typical with all such movements, he had both devoted followers and fierce detractors.  His followers went everywhere he went, and hung on to his every word.  His detractors thought him a self-serving and evil man, one who had abandoned the ancient, sacred traditions just to glorify himself.

Every day at the same time, the religious leader would walk through the town.  As he traveled the same route each day, his followers trailed behind.  One day, as they were walking through a narrow street in a poorer part of town, an upper-story window flew open.  A woman leaned out of the window and shouted insults at the leader.  She then dumped a bucket of garbage on him.

Anger surged through the followers like an electric current.  They shouted angrily and started moving toward the stairs in order to subdue the woman and avenge their leader.

The leader thrust out his arms to stop them.  He then said calmly, “My religion is one of peace.  Come. Walk with me.”  Carefully he wiped the garbage from his head and shoulders, and then peacefully walked on as if nothing had happened.  The followers were again walking through the same part of town.  As they approached the place where the incident had occurred the day before, the shutters flew open.  The same woman leaned out of the window and dumped insults and garbage upon the leader, just as she had done the day before.  The followers were now livid with anger, their repressed rage having simmered for a full day.  Yet once again, the leader smiled gently, as if he had been expecting this to happen.  Again, he held out his hands to restrain his followers and simply said, “My religion is one of peace, of brotherhood.  Come.  Walk with me.”  The followers were incredulous.  They could not understand how the leader could willingly accept such abuse a second time.  But they reluctantly consented to their leader’s wishes and fell in tow.

One day, they were walking down the same alley, and as they passed that now-familiar window, no shutters flew open, no insults were hurled, and no garbage descended.  The leader stopped.  He turned to his followers, and, as if talking to himself, wondered aloud, “Yesterday she looked pale.  I think she is sick, and that is why she has not come to the window.”

To the astonishment of his followers, the leader walked upstairs and knocked on the door of the woman’s apartment.  A servant came to the door.  The leader asked about the welfare of the lady who lived there, and the servant confirmed that the woman was indeed ill and in bed.  The leader then went to her bedside, held her hand, and comforted her.  He sat beside her for a long time, stroking her hand and soothing her pain.  He then sent for a doctor, and when he felt certain that she was well taken care of, he left and resumed walking down the street with his followers.

Each day thereafter, he visited the woman and cared for her.  She was initially full of distrust.  As the days passed, her suspicions began to melt away.  She realized this was no ordinary man.  When she was finally well, she bowed to him and said, “I am deeply sorry.  You are truly a great leader – nay, you are a prophet.  I accept your faith, and I am deeply humbled by your might equanimity and your immovable peace.”  This woman became one of the most ardent devotees of the leader whom history remembers as the great prophet Mohammed.

In this lovely story, prophet Mohammed embodies the unshakeable inner peace that keeps us sane when life seems to be dropping garbage and insults on our weary heads.  (I cannot verify this story of the prophet as being true, though it brought me to tears, and helped me to truly respect him.  It was told to me by a family member to explain what a great and peaceful man the prophet Mohammed really was.)

Peace is the inner awareness that, despite it all, everything is in its places.  Peace of mind keeps us afloat when wild waves buffet our fragile boat.  It is peace that allows us to sleep well at night.  It is peace that creates the inner knowing that no effort is in vain.  Indeed, even physical healing happens only when our nerves are calm and we are at peace.

The true purpose of peace

By meditating or practicing yoga, we should not merely seek the peace that a wise practice inevitably leaves in its wake.  Peace is not an end unto itself, just a means.  When our mind is at peace, we can listen to our heart, realize our dharma, and then act upon it.  A troubled, turbulent mind can hardly see itself objectively or fathom the purpose for its creation.  Hence, cultivating peace of mind helps us discover the purpose for our existence.  Peace must not simply serve our desire for comfort; it must serve our dharma.  So find peace, yet reject peace.  Strive for purposeful peace, while discarding the lethargic peace that prevents you from actively living your dharma.

This article was first published on purnayoga.com; reposted with permission from the author. 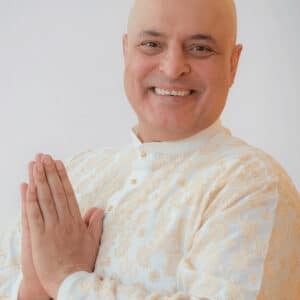 Aadil Palkhivala
Aadil Palkhivala (E-RYT 500) is a Certified Yoga Therapist and co-founder of Purna Yoga College, as well as the co-director of Alive and Shine Center.