We Who Grieve Aren’t Strong, We’re Trying To Survive

We recently lost a dear family member to a lifelong illness at just twenty-three years old. As his devastated father and I were exchanging dozens of texts during those first days following his death: details about the memorial service and speakers who would offer reflections and the minutia of the printing of the program—he interrupted the seeming ordinary of the conversation with a sobering two-word declaration.

And then he returned to the logistics of the funeral.

That’s it. That’s the reality of this kind of loss. Despite what we may want to be true about grief, there really are no silver lining life lessons or detached moments of perspective that shield your heart from the scattering shrapnel of grief.

After you lose someone you love, people often tell you they admire your strength. They say it with great affection and with the sweetest of intentions. They say it because they genuinely believe it to be true.

The death of a person you shared your life with immediately places you in a very specific community: you become a survivor. This isn’t an accolade you earn or a title you work for, it’s simply your status now. Someone dear to you has left and you are still here—just trying to survive the horrible event of their departure.

A couple of months after my father died, my mother relayed a conversation she had while running into a distant relative in the grocery store. After an awkward exchange of small talk that eventually stumbled into the topic of the dead elephant in the room, the person complimented my mother:

“I admire you.” the relative said. “You are just so strong through all of this.”

As my mother later recalled the statement to me, she asked me with feigned curiosity:

“What choice did I have?”

We both knew the answer to that question.

The mistake people make when they look at you after you become one of the bereaved, after you become a survivor—is that they see you appearing to function and ascribe some lofty virtue to your efforts, not realizing that you are marshaling every available resource to simply appear normal while in their presence.

You’re doing your work and taking the kids to soccer practice and getting groceries and attending Christmas parties because you have no other options—and because those things are necessary distractions that busy you between those many private moments when your heart explodes once again, and you fall apart in quivering fits and floods of tears and curses at God—and your voice making terrible sounds nothing other than grief can produce.

And this is the truth about those of us who are living with the loss of someone we love. However together or capable or steady we might seem or be able to project in the small sliver of time when you see us on social media or pass us at work or run into us at the grocery store—we are far less together, capable, or steady than you think.

Regardless of the sturdy facade we put in place, we are likely falling apart just out of sight. We are shattered and pissed off and paralyzed with pain, and we are weak enough to be knocked down by a song on the radio or the sight of their shirt hanging on the door. We’re curled up on the bed we shared with them, or we’re staring at the empty chair across from us, and we’re as far from strong as we can be.

Because the reality of becoming one of the bereaved is that it isn’t poetic and it isn’t beautiful and it isn’t instructive—it just sucks.

No, we’re not strong, we’re grieving.

We are the people our loved ones are survived by.

And we’re just trying to survive. 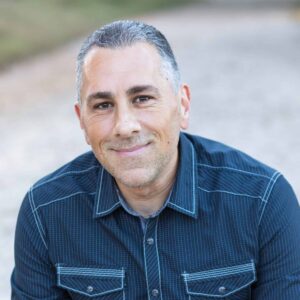