A friend recently wondered aloud whether she has a sign around her neck, invisible to her, that solicits strangers for advice. She enjoyed a respite from unsolicited feedback when we were at our most vigilant about social distancing during the Covid-19 pandemic, but with a shift back toward normalcy, the fragile détente seems to have been called off. During a recent routine trip to her favorite cafe, no fewer than four people offered her advice on crossing the street, choosing a pastry and reading material. She takes it in stride but she knew I would be a sympathetic ear: I am on record as being very cautious about giving advice.

Part of my reticence stems from my academic training. As the saying goes, the more I learn, the less certain I am about anything. That is especially true in sociology, a discipline that is acutely aware of how much human beings introduce uncertainty into any model of human behavior.

Like my friend, I seem to have one of those faces that invites all manner of advice from strangers. Some of it is well meaning. But most of it feels like an aggressive judgment of my entire being, a kind of property assessment. I shared a picture recently online, an image of me smiling after an enjoyable teaching day. A woman with whom I had never engaged on any medium told me I needed to paint the riser on my stairs, visible in the background. Then she told me which paint color to use: Sherwin-Williams Urbane Bronze. Unsolicited advice strikes in the oddest ways.

Judging by how awash our culture is in advice, I may be in the minority of people who do not relish giving or receiving advice. Advice columns remain some of the most popular regular features in newspapers, magazines and online publications. They follow in the footsteps of Ann Landers and Dear Abby. My grandmother could not get enough of these columns when I was growing up, preferring Ann to Abby. I did not understand the difference between the two, but choosing one over the other felt like a political choice.

There have been many competitors for the Ann/Abby throne, but never before have there been so many types of advice brands. You can “Ask a Manager” a.k.a. Alison Green for career advice. “Ask Bear” is on a book-writing hiatus but when in the saddle, Bear Bergman takes questions about gender and sexuality. Slate has “Care and Feeding” (parenting advice), “How to Do It” (sex advice) and “Dear Prudence,” which has a new expert, Jenée Desmond Harris (who also writes an advice column for The New York Times). Harris tackles it all, sometimes turning to the wisdom of the social media crowd to respond to letters. Heather Havrilesky’s “Ask Polly” column frequently crosses over into pop culture discourse with advice to millennials on how to adult.

Of course, you cannot survey the landscape for advice without mentioning the many social media sites dedicated to helping anonymous people solve their problems. Reddit is full of subreddits, or anonymous boards organized around subcultures, dedicated to advice. One very popular subreddit dedicated to deciding who is at fault in a particular situation has over three million subscribers. Despite my aversion to unsolicited feedback, even I have been lured into voting up or down in that forum. Another, the “Relationship Advice” subreddit, has 5.6 million subscribers.

That is the thing about advice: It is seductive. Even though we resist being judged, we enjoy being the judge. Advice is a method by which we manipulate status to negotiate interpersonal interactions. By giving advice, we enact tiny theaters of social dominance to signal or procure our social status over others.

Imagine a restaurant where a young mother soothes her fussy baby. The fussy baby is disrupting the environment for another woman. The woman who leans over to tell a stranger that she really should not let her baby use a bottle at that age is asserting her superiority to control the environment for a brief moment.

We also use advice giving to reinforce our self-perception as one who knows, and cultivate that perception in others. That is the neighborhood busybody or the office mate who stops by your desk to casually explain how you should do your job. In a nutshell, the insecure often give advice as a way to feel better about themselves. These little dramas play out all the time. Re-emerging into public life after a year and a half studiously avoiding any intimate social theaters just throws into relief how pervasive advice is during more normal times.

The culture of advice may be more dominant than it once was, but the advice industry is not a new phenomenon. Advice columns have been around since at least the late 17th century. The earliest were aimed at men, who wrote to editors for business and citizenship education. But what we think of today when we think about advice columns — the confidential tone, informal style and personal subject matter — did not arrive until the 19th century. The columns of this era were aimed at the new white, middle-class, female reader. Technology had freed these women from some of the intensity of domestic labor, but their roles as wives and mothers restricted their freedom to participate in public life. The advice column was a way to connect and to consume.

The topics were restricted to the cult of domesticity, and the advice columns lost their prestige in newsrooms even as they became some of the most popular features in print media. Rather than male editors tackling letters, the female advice maven — a legitimate busybody — was assigned to dole out the advice. Although gendered and diminished as mere gossip, advice columns served a useful function. David Gudelunas writes in “Confidential to America,” his 2008 history of the advice column, that the genre was a sort of secular sex education for women and heterosexual couples. They communicated the rules about gender and class that were rapidly shifting as the nation urbanized.

In the social media era, advice culture feels bigger and more pervasive than ever. After all, what is social media if not the gamification of advice? Every time we post something on Facebook or Twitter or Instagram, we are implicitly asking others to make a judgment of us. And we find ourselves unable to understand why someone would post or share an experience if not to solicit our evaluation. That is what “likes” and comments and “friending” has done to our brains. We all think we are Ann Landers.

Advice culture is so pervasive that it must serve some other function, do something more than assuage insecurities or performing status. Sociologists generally agree that advice is up there with small talk for how it facilitates human connection between strangers. But I recently began thinking advice is no longer a mere subset of small talk but has become our culture’s default common language. Advice is small talk. The decline of social associations like the Rotary Club and the bowling leagues not only weakened our connections to community; it also atrophied our linguistic tool kit.

That is the cultural mélange from which we draw the building blocks of small talk, and it is thinning. Small talk is reflexive communication. We do it to take up space in public, where silence can be threatening or scary. Have you ever tried to stand silently in a very slow elevator with a couple of strangers? It does not take long before someone breaks the uneasiness of that forced proximity by commenting on the weather or on sports or … well, on weather or sports. Because those are really the only safe discursive spaces for socially acceptable small talk. Or are they?

As partisan divides about everything have become more present in our public discourse, there are few topics left from which to draw low-stakes small talk. The sociologist Robert Putnam has pointed out that the more diverse communities become, the less people in those communities engage in small talk and other forms of small solidarities. The effect might be due, in part, to how diversity makes it impossible for any talk to be small enough. Casual sports talk now draws us into proxy wars over Black Lives Matter and concussions and Kyrie Irving’s possibly conspiratorial ideas about the vaccines. And what can we say about the weather that is not fundamentally a statement on climate disaster? (“Why yes, Gayle, it is hotter this year than ever before recorded in human history.”)

These topics have always been political, of course. I recently watched Ken Burns’s new documentary on Muhammad Ali, and there is no way to separate The Greatest from politics, especially in 1961. But the social worlds of people who would disagree about Ali’s moral character were fairly distinct. In a segregated society, small talk was whatever the racial majority wanted it to be. In our sexist society, advice — or mansplaining — is taken as natural. There is always an unspoken politics to our everyday speech. In many ways that matter, it is better that those politics are more evident even if that makes for coarser everyday chitchat.

Still, that leaves a practical problem: Just what do we talk about with strangers? And to be clear, earbuds aside, we must talk to strangers. Dreaded by some — including me — small talk has a crucial function: By allowing strangers to connect with one another, it creates the substrate from which society can grow. Small talk and gossip build tiny moments of social solidarity. They engender cooperation among people without close ties to one another. That cooperation makes everything from crossing the street to lining up for a Cronut possible. Advice enters the chat.

Advice — the need to give it and the social value of giving it — may be about how little else we have to talk about with one another. When in want of something small to say to ease the everyday interactions we have to have with strangers, we choose to tell people what to do because that is the safest topic we can think of. 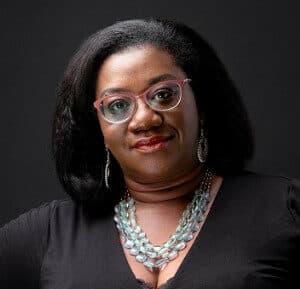 Dr. Tressie McMillan Cottom
Tressie McMillan Cottom, PhD, is an award-winning author, researcher, educator, and cultural critic whose work has been recognized nationally and internationally for the urgency and depth of her incisive critical analysis of technology, higher education, class, race, and gender. Tressie is the recipient of a 2020 MacArthur "Genius" Award and is an associate professor at The University of North Carolina Chapel Hill. You can learn more about Tressie or contact her at tressiemc.com.

An Empowering Weekend
of Learning with Your Favorite Feminist BFFs

The Semblance of Control