The debate on ‘why it is good to be a vegetarian’ has long been settled. The internet is full of information on why eating meat is not good for either one’s own health or the environment.

Hormones make cows grow faster and add more bulk. These chemicals then end up in the bodies of consumers, whose systems reject them. Eventually, they may cause cancers and other immune system disorders.

The human body is designed for a vegetarian diet. Our teeth aren’t pointed and our intestines are much longer than our bodies, very much like herbivores. Carnivores have short intestines, through which meat passes easily. Meat passes through our intestines much more slowly and is very heavy to digest, sometimes taking up to 72 hours. In this time, it rots and ferments.

Carnivores’ saliva contains sulphuric acid which breaks down the flesh and it’s digested easily. But human saliva doesn’t do that. So much energy is wasted because your stomach’s gastric juices and hydrochloric acid cannot digest animals. Vegetarian food, on the other hand, easily moves through us within a few hours.

We’re born for meditation. A slimmer body is a healthier body. We don’t require that much protein. Fitness isn’t having six-pack abs. Fitness is when you can decide yes or no to various kinds of food whenever you want.

Think globally—we are a green planet. We grow grass, we use it for animals and then we eat them. Animals eat a lot of green grass and hay. A cow drinks a ship-full of water in a lifetime, one as big as an IANS Vikrant (an Indian Navy vessel that is 860 feet long). Cattle are also the number one agricultural source of greenhouse gases worldwide.

And, there’s plenty of disturbing information and footage available on the cruel, inhumane treatment animals receive in slaughterhouses.

The whole globe is becoming vegetarian now. Eating meat creates a lot of hunger and poverty in the world. It’ll be a great act of seva (service) if you become vegetarian.

So, ethically, environmentally, and health-wise, it’s a wise choice to be a vegetarian. It’s even better to eat organic fruits and vegetables, which have no chemical insecticides and fertilizers.

How to Become Vegetarian

The only reasons for still eating meat are cultural habit and craving for taste. The way to overcome craving is to begin with small, time-bound commitments and then gradually increase them, by giving up meat for a day, a week, then two weeks and so on. One can use tofu and other forms of soya for ‘mock meat.’

We have observed that with the practice of meditation and pranayama, one’s taste changes naturally and the body begins to desire food that keeps one feeling light, moving away from other foods. Many have become vegetarian on their own after doing our workshops.

However today, with a massive global consumer base, producing meat is highly profitable. So, there’s a big lobby that discourages vegetarianism and learning about the harmful effects of meat. In India, the issue also assumes religious connotations and therefore becomes political.

Life in its infinite forms exists as one organic unity. We are part of it; the part should feel reverence for the whole. That’s the idea of vegetarianism. It simply means: don’t destroy life. It simply means: life is God—avoid destroying it, otherwise you’ll be destroying the very ecology upon which human life depends.

Lao Tzu insisted on vegetarian food. In his monastery, non-vegetarian food was absolutely prohibited. Gautam Buddha was also strictly vegetarian. All his followers were vegetarians. That was revolutionary, because man had eaten meat for hundreds of thousands of years before. According to Buddha, humankind would remain barbarian unless it became vegetarian.

Killing life is destroying your own possibility of growth. You have to respect life; a reverence for life will help you grow your consciousness. Buddha and Lao Tzu were absolutely right.

Vegetarianism functions as purification. When you eat animals you’re under the law of necessity. You’re heavy; you gravitate more towards the earth. As a vegetarian, you’re light and follow the laws of grace and power, and start gravitating towards the sky.

Your food is not just food; it’s you. What you eat, you become. If you eat something based on murder, on violence, you cannot rise above the law of necessity. You remain more or less an animal. The human is born above the animals, when you eat a violence-free diet.

Vegetarianism is a conscious, deliberate effort to escape the heaviness that keeps you tethered to the earth. The lighter the food, the deeper the meditation. The grosser the food, then meditation becomes more difficult. I’m not saying that meditation is impossible for a non-vegetarian—it’s not impossible, but it’s unnecessarily difficult.

The higher you’re trying to reach, the more you’ll have to drop unnecessary luggage. Only then you can fly. The effect of a non-vegetarian diet is unnecessary baggage that weighs you down.

Changing diet will change the qualities of your physical body. Food isn’t just energy, but is also qualitative. Food contributes more than fuel. It’s not so difficult to change this body, because the body is in flux, every moment changing; it’s a process, not static. When you were born, you had a different body; now the body has changed. It’s changing constantly, every moment like a river flowing.

The Light and Heavy Influence of Food

One should become aware that whatever one is eating must not make one’s body heavy. This heaviness isn’t concerned with weight. Sometimes you feel that you’re weightless, as if you can fly. So the food that can give you the feeling of weightlessness is the right food. The food that gives you the feeling of being burdened isn’t the right food. All non-vegetarian foods make you more rooted in the earth; you cannot fly. Vegetarian foods give you wings along with an inner feeling that you can just levitate and escape gravity. Food is right if it’s non-gravitational. If you can feel non-physical, it’s good.

The Food Science of Patanjali

Patanjali—author of the Yoga Sutras—is scientific. If you want to change posture, Patanjali will say change your food habits, because every food habit creates subtle postures. If you’re non-vegetarian, your posture will be different because the body is built by your food. It’s not an accident. Whatsoever you put in the body, the body reflects it.

So vegetarianism for Patanjali is not moralistic, but instead it’s a scientific method. When you eat meat, you aren’t only taking food, but you’re allowing the animal from which the meat has come, to enter you. The meat was part of a particular body and instinct pattern. The meat was the animal and carries all the impressions and habits of the animal.

When eating meat, your many attitudes are affected. If you’re sensitive, you can become aware that whenever you eat, certain changes immediately come. For example, you may drink alcohol and then you’re not the same. Immediately a new personality manifests. Alcohol cannot create a personality, but it changes your body pattern and body chemistry. With this change, the mind changes its pattern, and when this happens, a new personality arrives.

Food for a Violence-Free Society

A violent diet doesn’t just mean that someone eats non-vegetarian food—it’s also a violent diet when a human being eats with anger. Both of these things are violent. While eating in anger, in suffering, in worry, one is also eating violently. The person doesn’t realize that just as when eating flesh, so also when one’s own flesh burns up inside due to anger and worry, violence is present there, too. Then the food can’t be non-violent.

The other part of right food is that you should eat in a very peaceful, joyful state. If you’re not in such a state, then it’s better to wait until you are. When the mind is absolutely ready, only then should one take meals.

If you are aware enough to wait, then it will take only one day at most, but we’ve never bothered to listen. We’ve made eating a completely mechanical process. One has to put food into the body and then leave. It’s no longer a psychological process, and that’s dangerous.

Since food is essential for life, many cherish the right to exercise their freedom of choice—arguing or forcing anyone won’t work.

The right way is to make everyone aware and then let them choose for themselves. It may take some time, but most people eventually realize that short-term gratification isn’t worth the long term troubles it brings.

Quality of life improves when we make choices that are life-supporting. Being vegetarian doesn’t just helps one’s own life flourish but also that of other beings, and the whole world. 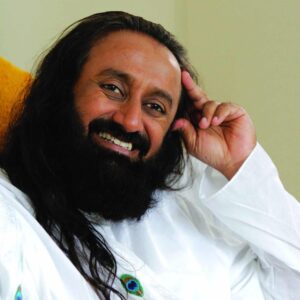 Sri Sri Ravi Shankar is a humanitarian and spiritual leader, an ambassador of peace and human values. Through his life and work, Sri Sri has inspired millions around the world with a vision of a stress-free, violence-free world.  He has founded courses that provide techniques and tools to live a deeper, more joyous life and he has established nonprofit organizations that recognize a common human identity above the boundaries of race, nationality, and religion. srisriravishankar.org

The Season of Sabzi

Honor the Earth with Wild Edibles

I Only Have Fries for You: Tofu Fenugreek Fries

What’s Your Hurry? Have Some Curry!