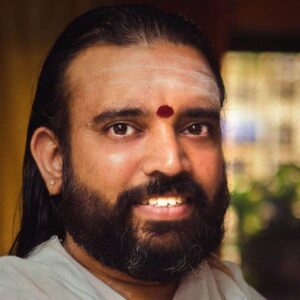 Dinesh Kashikar, affectionately known as Kashi, is the Director of Teacher Training for the global Sri Sri School of Yoga in India and part of the curriculum design team, bringing more than 15 years of training aspiring yoga teachers in the various dimensions of the study and practice of yoga.

Kashi began studying yoga at the age seven when he completed Upanayanam, the ancient thread ceremony, thereby beginning his formal education in the Vedic tradition from which Yoga comes. Walking on the path of yoga naturally brought about an interest in the source of yoga, and with a background in Sanskrit, Kashi has immersed himself in the study of what he calls a wonderful treasure trove of knowledge, including the research in both the spirit and science of yoga. His life long journey in the study of yoga especially blossomed when in 1995 he became a full-time volunteer with the Art of Living Foundation, a global non-profit educational organization founded by Sri Sri Ravi Shankar.

From student to teacher, Kashi now delivers a diverse set of yoga based programs for the Art of Living globally taking him to many parts of the world. Kashi conducts the Sahaj Samadhi, a mantra based meditation workshop, the Happiness Program, a Sudarshan Kriya breathing based self-development program, to more than 100,000 participants internationally, the Sri Sri Yoga Deep Dive Retreats and the Vedic Wisdom Course, a month long immersive curriculum in the ancient sciences of yoga, among others.

Under the guidance of Sri Sri, Kashi has taken on incredible responsibility and leadership in growing Sri Sri Yoga in India and globally. He has empowered yoga teachers in the authentic traditions of yoga, making it accessible and practical, so that individuals can both personally thrive and confidently teach. His style of teaching is infused with humor and lightness and reflects his versatility in the knowledge of yoga, expertise in training and ability to connect with a variety of audiences and cultures.

For Kashi, yoga is a way of life, a philosophy that spans the gamut of the mundane to the sublime; it can shape one’s life both on and off the mat. He guides his students through this journey covering the building blocks of yoga teacher training – asanas, instructions, anatomy, physiology for example – coupled with the contextual knowledge of yoga, so that teachers can infuse an appreciation of the philosophy and tradition in their teaching. He skillfully prepares yoga teachers to understand, utilize and teach the tools of yoga, balanced with the freedom of practice, to naturally experience the pure state of yoga within.

His travels have taken him throughout Asia, the United States, and Europe where he has conducted a series of yoga tours and immersive yoga based workshops. Over the years, he has also had the honor of traveling with HH Sri Sri Ravi Shankar across India conducting yoga sessions for gatherings in the thousands.

Kashi is a graduate of the prestigious Indian Institute of Technology. He is a E-RYT 500H with Yoga Alliance and is a member of the Steering Committee for Yoga for the Quality Council of India, a government body that upholds the current certification process for yoga professionals. Kashi also is a member of the academic council of Sri Sri University where he is instrumental in designing and upgrading the curriculum of graduate and under graduate programs in yoga.