Fearless in the Face of Fear

Have you ever been afraid? What happens? You hold back, maybe just for a second, or possibly forever. You choke on the words that need to be said and instead spit out something that bars you going down the path that truth would have taken you on. Ever regret it later that you let fear get in the way?

Brant speaks about this normal human emotion in every single workshop of his that I have been to. He also gives tools to rid one’s self of the hold fear can have on us. I used them over and over and over during my racing career because certainly, when faced with exactly 140.6 total miles of racing and an island environment that defines the word “intense”, fear was certain to emerge at some point. But as Brant would also emphasize, we can be fearless in the face of our fears, meaning we can take that first (or sometimes final) step into the unknown even with our fear, and through that empower our lives.

I learned a similar lesson about fear from an unlikely source a number of years ago. It came from a guy named Walter, who is the brother of a dear friend of mine Lisa. Walter is a surfer by passion, and on any given day is as good as the world’s best. We met one November at Lisa’s (and of course, Walter’s) childhood home on the North Shore of Oahu. This is the Mecca of surfing. It’s the Kona of that sport, and a place anyone worth their board shorts has to journey to at least once in their life. I’ve surfed since the mid-70’s, so for me this was a chance to become one of a select few who have paddled into some of the most perfect and powerful waves in the world.

Walter and I were ready. The swell was big even by Hawaiian standards. Then the sentence came. “Whatever you do, don’t hesitate at the top of the wave or your cooked.”

“Don’t Hesitate.” Let me translate this for all of you. It means don’t let fear get in the way. What Walter was saying, certainly from experience, is that as you paddle for one of these moving football fields, no two exactly the same, there will come the moment where you have to apply all the force your body can muster to create enough downward pitch in your board to start the drop into this gigantic moving wall of water, and if you hesitate you will get hung up at the very top of the wave, but just for a moment because in the next instant you will become one with the lip of the wave and get pitched into God’s thin air. Enjoy the ride because at some point you will, with the accelerating force of gravity, come in contact with cement-hard water at the bottom of the wave just in time for what will feel like a Mac truck crushing down on top of you, turning your helpless body into a rag doll that will have absolutely no control of your destiny for what will seem like an eternity. Okay, so have fun.

Walter easily slipped into the first elevator drop that came our way. The next one was mine. All those Ironman championships must count for something, right? Only if you don’t hesitate. I was positioned perfectly. The second wave of the set was coming right to me. I turned toward shore and started to paddle. Up I rose, as the first 2/3’s of the monster passed underneath me. The lip was next. I had to get forward speed down the face before the lip pitched. And then…I hesitated.

The world stopped. Walter’s words were like a bomb going off in my head. “Don’t Hesitate.” In my races I never hesitated. Regardless of how impossible something seemed I still went for it. I never, ever gave up for one second. Fear was there, but it was always background noise. But there I was, a legendary moment was unfolding, and I was hesitating. I had good reason to! It was the biggest, fastest moving wall of water I had ever encountered, and Walter was gone. There was no one in the vicinity to help me if I needed it. It was the wave, my fear and me.

If I hesitated a nanosecond longer two things would happen. Either I would miss the wave as it passed underneath me, or I would have my personal Niagara Falls barrel ride, without the barrel.

What do you do when fear strikes? Do you hesitate? Does the energy and possibility of the moment pass you by? Can you become fearless in the face of your fears and drive forward anyway? Do you get pitched into the oblivion of self-doubt wondering if you will ever surface? Or do you just dig with all your might and thrust yourself into life’s moving wall of unpredictable waters?

Brant had said it thousands of times. “Be fearless in the face of your fears.” Simple words from one of the greatest shamans ever speak to the inner part of your soul; the place where all of our spiritual strength comes. The place beyond thought or reason that will find trust even in the toughest moments.

I dug. And dug. And in the next instant I had it! I popped to my feet and dropped into one of creation’s most amazing creatures. For the duration of that ride, and then some, I was charged up with the moment that exists beyond fear, where we deactivate the negative effects of alarm clocks, deadlines and credit card debt and go for something that requires taking that extra stroke, even though it may drop us into oblivion anyway. 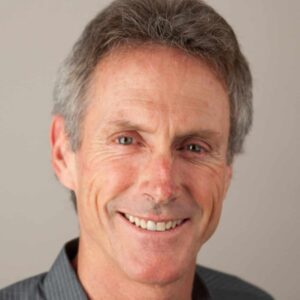 Mark Allen
Mark Allen is a six-time Hawaii Ironman Triathlon World Champion. Outside Magazine named him “The World’s Fittest Man” and he was voted “The Greatest Endurance Athlete of All Time” in a worldwide poll conducted by ESPN.