Why is simplicity such a seemingly complex achievement?

What makes simplicity so complex? Well, for starters, it’s not complex at all. We’re simply afraid of what we might have to give up to attain it. Of what we might lose. And of what we might discover of ourselves. Yet in reality, we give up little if nothing to gain so much. We lose only that which is illusion. So we have to ask ourselves, what is illusion? And why do we hold onto it so strongly? What makes illusion such a struggle to hold onto is that fact that it is illusion, i.e., that it doesn’t actually exist. So we are attempting to hold onto something that isn’t there. Not an easy thing to do. Dare we say, it’s not really possible to hold onto something that isn’t. Do we then try to hold onto an illusion because we are afraid that we are or have become the illusion and that people will see us for being just that without something to hide behind?

We all enjoy a little mystery, a little mystique every once in a while. It’s alluring, it’s enticing, it’s seductive. But if we’re not careful… well… too much and we become a caricature of ourselves. A parody, farce, satire, a distortion, mimicry or even a cartoon of ourselves. Ultimately we become a sham. It’s both one of the most difficult and yet one of the simplest places to return from. Difficult because of our fear of being revealed, and yet simple because all we have to do is let go of what isn’t real.

In the healing field, it’s easy to find ourselves hidden and obscured in indeterminate mystique. It’s alluring. The mystique itself makes us feel special and unique… or at least it affords us that appearance. The techniques make us feel masterful and in control. The rituals make us feel as if we’re a part of someone’s group, lineage or tradition. The protections make us feel as if we’re playing with something powerfully dangerous, keeping us in a fear-based relationship with whatever it is. All of this is part of an addictive and seductive cycle. One that gives us short bursts of pleasure that don’t sustain themselves because they are based upon the artificial. True healing is its own reward. True healing is its own reward. And to get there, we have to step into our own truth. Not necessarily what we desire to be our own truth. Not what we obstinately or self-righteously cling to as our own truth. But the truth that speaks when we ask ourselves what our truth really is … and there is nobody there to listen or hear the answer but us. 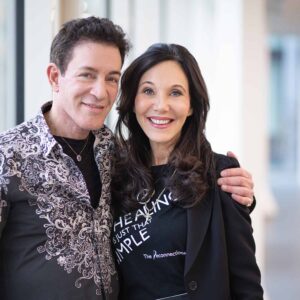 Dr. Eric Pearl and Jillian Fleer
Dr. Eric Pearl ran a highly successful chiropractic practice for 12 years when one day his patients began reporting healings as Eric simply held his hands near them. The healings came in unexpected forms and ways. These profound experiences began an exploration of what’s known as Reconnective Healing.