The Gut-Wrenching Process of Befriending Ourselves

When it comes to addressing the question of technology’s impact on loneliness, it seems people are split.

There are so-called techno-utopists and other thinkers who believe that technology is making the world a better place, and specifically that it enables connection across borders and boundaries of various kinds. And certainly, there’s power in organizing through social media, making friends deliberately and inadvertently, through online platforms.

I tend to be in this school of thought. When I came back from my first trip to India — when I was 18, and hadn’t yet even been to California — I’d say, “I don’t feel any psychological distance when I think of India.” I felt I could go for a short trip and not have an awkward, uneasy settling-in period before I felt comfortable. I could go and once again feel at home there. Now I wonder about extending that sense of no psychological distance through a device, not traveling somewhere else.

Yet at the same time, I can’t help but notice how addicted we all seem to be to our devices. (True confessions: I am too, as any of my friends would tell you.) One student of mine who suffers from insomnia has told me that she relies on scrolling when she’s up at night as a way to lull her back to sleep. “I feel alone and afraid,” she explains of her insomnia. “Being on my phone makes me feel like someone else is around.”

For better or for worse, there is no way around the fact that technology breeds isolation, at least in certain ways. Eighty-two percent of American smartphone users (a majority of our nation’s population) reported in a recent Pew survey that the presence of phones deteriorated their most recent in-person conversations. Such figures are harrowing, but not surprising.

What’s worse, whether or not it’s related to technology, is the fact that loneliness seems to be a kind of epidemic in our country. A recent report published in the American Sociological Review found that one in four Americans feels that they have no one they can talk to. Regardless of why 25 percent of Americans are struggling to find community, it’s clear that the problem is widespread: We are all searching for belonging, and the atomized nature of society isn’t making it much easier for us.

I really do believe that one answer to this universal search for meaning and connection is lovingkindness — the practice of cultivating love, compassion, joy, and equanimity for ourselves and for all beings.

Of course, when I teach lovingkindness meditation to students around the world, I usually try to qualify the term so that it doesn’t come off as sounding “saccharine,” or even “cheesy.” Though the combination of the words “loving” and “kindness” may suggest sentimentality, the practice is not about an obligation to some platitude of kindness; and, in fact, it’s not even about taking specific actions to make friends.

Rather, lovingkindness is a deep knowing that every individual’s life is inextricably interwoven. We all want to be happy, in other words. Keeping this simple adage in mind as a universal, inarguable fact establishes a simple foundation upon which we can really connect with others. When we see each other’s vulnerability as something common, the idea of friendship as something manufactured slips away. Connection becomes something much larger, much less concrete, and much more powerful.

I approach the word and idea of “compassion” similarly, making sure that students get I’m not just talking about pity or guilt — “feeling bad” for others in times of suffering. Above all, compassion has to do with paying attention — and doing so in a way that is suffused with lovingkindness, the recognition that each of our lives has to do with one another.

And yet even as I have made a habit of trying to underscore the rigor and power of these terms, I still find it fascinating that we’re conditioned to be more dismissive of concepts like compassion or lovingkindness than we are about ideas like discipline or strength. Perhaps we are reluctant culturally to regard compassion, lovingkindness, or even love more generally as something we can “train,” as that might feel mechanistic or artificial. But my sense is that we all share a sense of fear around opening ourselves up in this way, around becoming vulnerable to the idea that we are all looking for the same things, and can see this in each other simply through existing.

Barbara Fredrickson, Ph.D. is a psychologist and a leading researcher of positive emotions at the University of North Carolina, Chapel Hill. In her work, Frederickson found that moments of what she calls “micro-connection” (laughing, hugging someone, smiling at a stranger’s dog on the street) actually strengthen the functioning of our vagus nerve, the longest cranial nerve that stretches through the abdomen, and helps us deal more skillfully with the “fight or flight” stress response, and protecting the body against stress-induced inflammation. Friendship, connection, lovingkindness, compassion — and variations thereof — are rigorous as can be. They affect the quality of our lives, but also our health.

But that doesn’t mean opening ourselves to lovingkindness is easy, as beneficial as it can be for us, either on our own or in relationships with others.

Learning the practice of lovingkindness and applying it in our relationships can actually feel painful in the moment, in that it brings up unexpected feelings we may not be trying to conjure. Whenever I try to address the difficulty of opening ourselves up to such a vulnerable way of thinking about the world — that all beings want to be happy, just as we do — I think of a student of mine, Sean, who recently told me in retrospect that the two weeks he spent reading my book Lovingkindness were “gut wrenching.” He did not mean this sentimentally.

“I hadn’t dealt with unpleasant aspects of myself before and I never really put myself in other people’s hearts,” Sean told me.

“I hadn’t forgiven before that book. I was walking around for years with this fear of really connecting with all of the aspects of myself and close friendships and relationships.”

This process of realization was, unsurprisingly, not terribly enjoyable for Sean, even as he felt himself growing and opening up to richer and more profound feelings of connection in his life.

In the same email conversation Sean told me a surreal story about meeting his partner, whom he first encountered as a neighbor in the apartment building he lived in while spending time in Beijing many years ago. Sean and his now-partner didn’t actually meet while living abroad; they ended up reconnecting six years later at Spirit Rock Meditation Center, after Sean had become a Buddhist monk. Today, Sean and his partner have been together for more than two years, and he describes their connection as “primordial,” one possessing “uncanny synchronicity.”

When I read and re-read his email to try and understand their relationship through what Sean had first said about lovingkindness, it became clear that acceptance is what makes his relationship so rich. “Together, we feel seen and we feel accepted,” he wrote. “Lovingkindness is what…opened my heart for real love to exist.”

He charmingly described his lovingkindness meditation practice as “an S.O.S. pad for the heart” — referring to those soapy steel wool pads that clean off the grime on dirty pots and pans. The practice, according to Sean, is “abrasive” and “feels harsh” (just like an S.O.S. pad!) but enabled him to undergo a process of “purification.”

“Going through those practices, I was cleaning my heart,” he wrote. “I knew what had been trapped in there and I knew what was down in the corners and crusted over once I exposed it and rinsed it. With some exposure and compassion, I felt relief… And I felt cleaner.”

To me, Sean’s story is one about befriending himself, in addition to being a wild romance about coincidence and rediscovery. He was able to open his heart to his partner not because he had been purified in some absolute way by learning the practice of lovingkindness, but because the practice enabled him to recognize his fears, live with them, and pursue connection regardless.

Even from personal experience, I would argue that there’s a meta-level of fear each of us feels in the process of “getting real” with ourselves about what connection actually looks like in our lives. Are we ready for vulnerability? Do we feel willing to see our flaws come up as we become vulnerable around others, and experience them do the same? Are we willing to be open to the idea that others can see our vulnerability, just as we see theirs? Asking these questions — and being willing to answer them with inevitable uncertainty — is part of the process of befriending ourselves.

Reposted with permission from sharonsalzberg.com. Originally published April 18, 2017 on On Being. 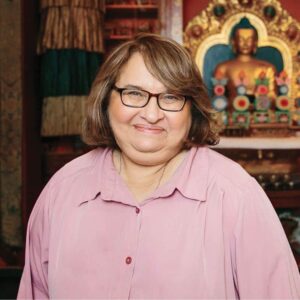 Sharon Salzberg
Sharon Salzberg is a meditation pioneer and industry leader, a world-renowned teacher, and New York Times best-selling author. As one of the first to bring meditation and mindfulness into mainstream American culture over 45 years ago, her relatable, demystifying approach has inspired generations of meditation teachers and wellness influencers.